A discussion on how this past unique year has been affecting indirect tax clients in the area of digital transformation and how working from home is affecting physical presence and sales tax compliance. 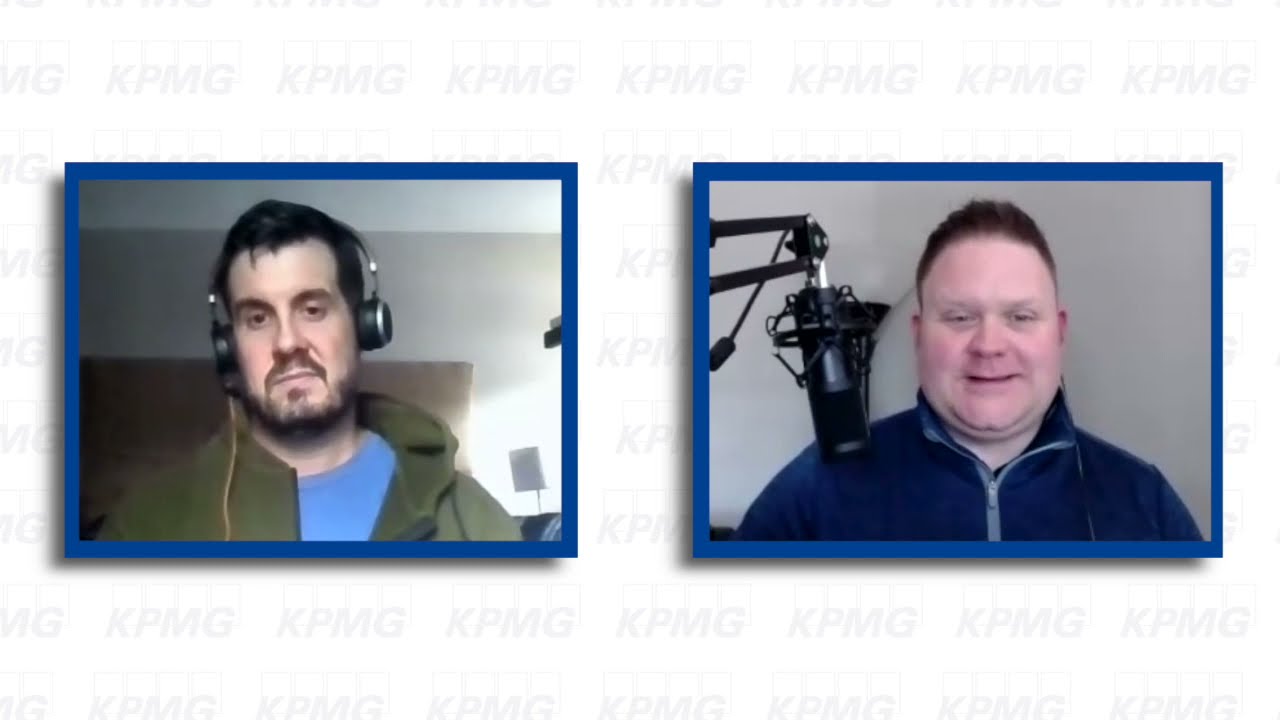 KPMG State and Local Tax (SALT) partner, Jeff Burns continues the Seasoned Conversations with SALT video series with SALT Managing Director, Jeremy Jester.  In this episode Jeff and Jeremy discuss how this past unique year has been affecting indirect tax clients in the areas of digital transformation and how working from home is affecting physical presence and sales tax compliance.

Jeff Burns: All right. Hey, Jeremy. How are you?

Jeremy Jester: Good, Jeff. How are you?

Jeff Burns: I’m doing well. Thanks for joining me for episode three now of Seasoned Conversations with SALT. Today I just wanted to catch up with you on a couple things. I think the first place to start at least for you and I and soon to be others is the obvious. You came back to the firm within a very short period of time before we all went, officed closed and then this virtual environment. What’s that been like for you?

Jeremy Jester: It’s been interesting, but it’s been great. My first day was at the end of March just over a year ago, and I was just telling a couple folks that this has been the most fulfilling year of my career over my, what, 15, 16-year career. So glad to be back. I spent my first five years here, and the transition has been great. It all comes down to the people. I really mean that from the bottom of my heart. The culture here at KPMG in the SALT practice specifically, it’s just a little bit different, and it’s been a great year and two months or two weeks.

Jeff Burns: I appreciate you saying that. Being in our Indirect Tax practice, I think you bring a unique perspective not only joining right in the middle of what put us all in our homes working, but what’s happening from an organizational perspective for a number of our clients and companies across the globe, and that’s really around how they’re reacting to this environment in line with a huge push to digital transformation. So, from an Indirect Tax perspective, how are you seeing that impact our clients?

Jeremy Jester: It’s impacted our clients. At first we were talking about the work from home. What does that really mean in the taxability of face masks and little minor things? But really what we’re seeing is a lot of opportunity because people working from home, that doesn’t mean they’re working in the same state or the same city that their office was in. I’m in our Tysons Corner office.

A good example we see is companies who were normally in say Washington, D.C. which taxes a lot of software and digital products and digital goods. A lot of people don’t live in D.C., but they work in D.C. So, we’re helping companies revisit their purchases, whether they really need to be paying sales tax on that full Microsoft license or that full Oracle license or whatever digital good or software it is. So, if I normally worked in Washington, D.C., and this past year I’ve been working from home in Virginia, there’s a really strong argument that that portion of the license that’s assigned to me is not subject to Washington, D.C. sales tax.

So there’s a lot of cost savings involved now, and that’s just one small aspect. We’re helping out a lot of companies revisiting their purchase data. Historically up until Wayfair, they only looked at physical presence, and they really relied upon their vendors a lot and their own internal use tax processes, but since Wayfair we’re seeing a lot of opportunity and a lot of ways to help our clients on the purchase side because a lot of their vendors just don’t have the people or processes to review and have the systems in place to impose the proper amount of sales tax if any.

So, from their perspective, they’re just slapping sales tax on their invoices because they know they have nexus. They just don’t know if what they sell is taxable because there’s a lot of nuance between SaaS, electronically downloaded software, maintenance agreements if you’re selling a maintenance agreement in Virginia compared to Maryland, compared to Pennsylvania. So they’re just charging sales tax because it’s not their money. It’s their customers’ money, so it’s sort of a CYA.

So what we’re doing now is we’re doing a lot of reviews of sales tax paid to vendors. There’s a lot of cost-effective solutions that are not really that expensive for our clients that can manage that process for them where they don’t have to go out and hire another person or two. We’re providing a lot of value that those savings that they’re finding on the refund side that they can then apply to the systems on an ongoing basis. So they get that pop for the refund side, and then the cashflow savings moving forward. It’s really a win-win for everybody.

Jeff Burns: Yes, I know. That’s very interesting, and I think counterpoint to that is, what are the states doing? Because we’re now in this environment. We do see our clients in almost every industry heading towards digital platforms as a large part of their business, and so from a state perspective, how are they addressing that growing environment?

Jeremy Jester: Historically, states really struggled staying up with the economy the past 20, 30 years which says a lot why Wayfair came about. That was a huge leap for states to catch up, a nexus. But the next side is taxability because you can’t do nexus studies anymore without looking at taxability.

So what states are doing now, they are being more aggressive on audits for sure, and just over the river from me is a great example of what I would expect more states to do is what Maryland is doing. First, they now have a digital advertising tax that was passed. It was effective March 14th. There’s been lots of 2021. Well, it passed March 14th. It’s now going to be effective January 1, 2022. There was a lot of pushback from the community, Maryland business community. That legislation we’re expecting the governor to either sign or really not sign it but not veto it. So it will go into law 30 days from this week. They retroactively apply it March 14th, and that’s going to have a big impact on large organizations that digitally advertise in the state, in Maryland, the first.

There’s already been a lawsuit filed this week with it really saying, does it violate the Internet Tax Freedom Act? Because it only taxes online advertising and not tangible advertising. So that’s going to be really interesting to see. Other states have had similar rules potentially come into play. They haven’t passed yet. Maryland’s the first to tax digital advertising.

The other one that Maryland’s doing in the same legislation is tax on digital products. That came about March 14th, and immediately we got tons of calls. What are they doing? They then give a great definition of digital products. There weren’t any regulations imposed. There was something called a Business Tax Tips Number 29 that was extremely broad. It taxed online education. So conceivably at that time if you lived in Bethesda, Maryland but had a kid go to school say at the University of Pittsburgh but they were living at home right now in Bethesda, those tuition payments to Pitt would be subject to sales tax.

Now they scaled that back some, and that was part of that legislation this week. There’s going to be potentially some exemptions, if you read the legislative update, that large purchases of platform software like the Oracles of the world, ERP types of purchases, those are not supposed to be taxable, but it’s not clear in the guidance right now.

So, my point in saying all this is I would not be surprised that other states are going to do similar legislation. If you look at the legislative notes, I believe Maryland said, “We’ve made this as broad as possible because we don’t know where the economy is going five, ten, 15 years from now, so we want to make it so we have the ability to tax what the new digital economy is going to look like.”

Jeff Burns: Yes, so a lot of activity both impacting our clients, impacting how states attempt to tax what our clients are doing from a product or even an internal use perspective and then layer on this environment that we’re in. It sounds like the indirect tax world so to speak is just going to continue to be expansive and require a strong focus and support. So, I think more to come on this. This probably won’t be our last conversation, so appreciate the insights, Jeremy. Thank you for your time as always. Any parting words before we close out?

Jeremy Jester: No, I just think if people stay on top of their own internal process, just ask the question, ask your Indirect Tax team, how are you handling your compliance, how are you handling sales tax paid to vendors, you’d be surprised that you’ll get a lot of looks of I don’t know. Because the answer we receive a lot is, “This is what we’ve always done.” Well, states aren’t acting like they always have.

So, if you can just ask that question, I think you’d be surprised by the answer or lack of answer there, but this has been great, Jeff. I really appreciate you inviting me. You’re the type of person that has made it really great coming back to this firm, and I’m really looking forward to seeing what we can do together.

Jeff Burns: I appreciate you saying that and absolutely feel the same way. Look forward to working with you, and thanks again for jumping on this next episode. So, we’ll catch up soon.

Working with you to effectively and efficiently comply with income and franchise tax regulations.