Taxation of the Digital Economy

This article represents the views of the authors only, and does not necessarily represent the views or professional advice of KPMG LLP.

The OECD released this month details of the next steps to be taken in studying several possible tax proposals to revise geographic allocation of taxation rights through amended profit allocation and nexus rules.

Since the release of its Public Consultation Document (PCD) in February 2019, the Inclusive Framework on BEPS (Inclusive Framework) of more than 100 member jurisdictions, led by the OECD and G20, has continued to make progress towards its goal of achieving a multilateral solution to the tax challenges of digitalization by the end of 2020.

Consequently, the Inclusive Framework’s quest for a potential solution will be based on twin “pillars”:

The Inclusive Framework is focusing on developing a coordinated, global response that could reshape the tax system fundamentally for all types of business. The response would impact business structures that had no tax-motivated features, as well as those designed to realize tax-advantaged outcomes.

2017 and 2018 also saw significant acceleration in the pace at which countries and the European Union (EU), collectively, are developing measures to address the impact on the international tax system of highly digitalized businesses.

Increasingly, we are seeing unilateral and, in the case of the EU, multilateral plans to introduce a revenue-based DST or similar tax, intended to apply to larger, highly digitalized businesses. In general, the relevant governments have stated that they only intend for these measures to operate on an interim basis, until the international community reaches agreement on a longer-term solution.

Status of revenue-based measures as of April 2019

The color-coded table below shows the status of various major jurisdictions’ consideration of the adoption of revenue-based measures, typically involving a tax on in-scope sales of certain digitally facilitated services.

These represent one element of a spectrum of measures that different jurisdictions have undertaken. The other measures include expanding the scope of withholding taxes (in some cases to include a payment from one nonresident to another, where the payment relates to IP exploited within the jurisdiction) and penalty tax regimes applying to so-called “diverted profits.” 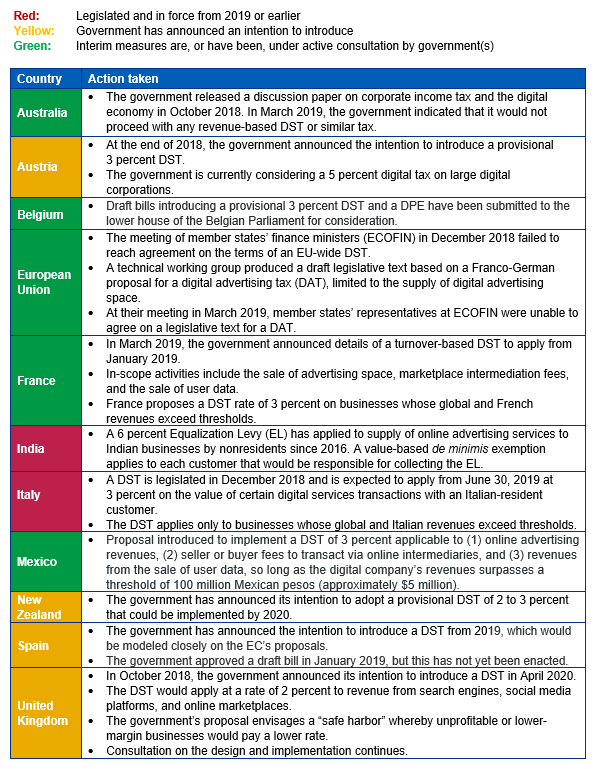 Emerging topics in the quest for a longer-term solution

It is clear from the Inclusive Framework’s PCD and the subsequent public consultation meetings that some adjacent BEPS-related measures are impacting the thinking on how a longer-term solution might operate.

The U.S. tax regime for GILTI

The global intangible low-taxed income (GILTI) provisions were introduced as a component of the U.S. tax reform legislation effective from January 2018. They require a U.S. shareholder of a controlled foreign company (CFC) to include in its taxable income its share of the CFC’s net income, to the extent that the latter exceeds a deemed return on the CFC’s tangible assets.

The U.S. shareholder is entitled to a deduction equal to 50 percent of the GILTI income.

In addition, the U.S. shareholder may claim a credit for up to 80 percent of the foreign tax that the CFC has paid on the GILTI income.

Combined with the participation exemption that would also now apply to a dividend received by the U.S. shareholder from the CFC, the GILTI provisions significantly reduce any tax advantage that would arise for a U.S. headquartered group in holding its intangible assets (such as IP) in an offshore low-tax jurisdiction, and retaining the resulting profits there.

The provisions create a minimum global tax rate for U.S. outbound groups on the income deemed to arise from intangibles, effectively a rate of 10.5 percent.

This precedent has led to the Inclusive Framework using it as a prototype for further consideration of whether the adoption of a minimum tax would solve some jurisdictions’ current concerns.

While it could be expected to address concerns about certain enterprises being perceived to pay insufficient tax on profits derived from a jurisdiction, it would not necessarily address the concerns about allocation of taxing rights to market jurisdictions, hence the twin “pillars” of the Inclusive Framework’s future work.

The intersection of corporate income tax and indirect taxes

The global corporate income tax debate centers on whether there should be a shift from a profit allocation approach with a supply-side orientation, toward an approach that achieves more balance with the market jurisdictions.

OECD-driven BEPS actions[1] on the indirect tax front (i.e., value-added tax [VAT] and goods and services tax [GST]) have already bolstered the ability of the country of consumption to impose its indirect tax on services or intangibles that are provided or made available offshore and, therefore, require no physical importation. There is increasing sophistication in indirect tax legislation so as to facilitate the registration of nonresident suppliers, and in tax authorities’ capability to collect such taxes.

Some participants in the debate are, therefore, concerned that a shift in the allocation of profits for the purpose of calculating corporate income tax would prove overgenerous to the consumption location.

Options for a global long-term response to digitalization

Of the core concepts underpinning the international tax rules contained in bilateral or multilateral tax treaties, the Inclusive Framework identified that the two put under the most stress by the emergence of digitalized business models are the “nexus” rule and the “profit allocation” rules.

The Inclusive Framework countries agreed that there is common interest in maintaining a coherent set of international rules for the taxation of businesses that operate across borders.

The table below shows the four proposals, grouped under the twin pillars, which will be the jump-off point for the Inclusive Framework’s next stage of work. The proposal under Pillar 2 could potentially be adopted (wholly or in part) side by side with the agreed Pillar 1 approach.

What is clear is that a sense of urgency is required in reaching agreement on the key components of what a long-term multilateral solution would look like. The PCD is encouraging evidence of the Inclusive Framework having refined its focus and discarded those ideas that would have the least chance of obtaining multilateral agreement.

Anecdotally, it appears that in the weeks following the public consultation, OECD and government officials’ confidence has increased in relation to the prospects for a multilateral solution. Prior to the G20 summit scheduled for June 2019, the Inclusive Framework intends to release a program of work reflecting how it will carry out its work toward an agreement. This program of work may outline the planned path to reaching a consensus solution.

It will be important to maintain this momentum to avoid an increased risk of the evolution of an international patchwork of unilateral measures, which could inhibit global trade and innovation, and not just in the already highly digitalized sectors.