Many taxpayers will feel the impact of the U.S. tax reform law passed in December 2017 (Tax Cuts and Jobs Act (H.R. 1)) in their tax returns to be filed by April 15, 2019. Several of the measures affect the tax rates, thresholds, deductions, and credits that individuals – including those on international assignment – are used to. In this nine-minute video, KPMG professionals discuss some of the key measures and their impact on individuals on international assignment. 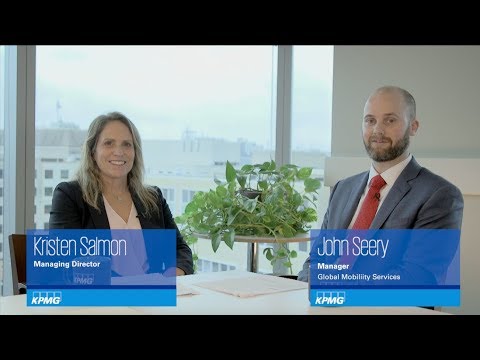 John Seery:  Hi, and welcome to KPMG's discussion on tax reform and international assignees. My name is John Seery, and I'm joined today by Kristen Salmon, and we're going to be talking about this upcoming filing season and some of the big-ticket items to be looking out for with the new tax law, commonly known as the Tax Cuts and Jobs Act, that might affect individuals subject to U.S. tax.

Kristen Salmon: Thanks, John. As you know, there's a lot of discussion out there about the new tax rate changes, but there are also a lot of other provisions that will impact individuals on their 2018 filing.

John: That's true. One of the biggest changes are the changes to the tax brackets. For 2018 through 2025, there are seven new tax brackets, which are displayed on your screen.

Kristen: These rate changes are only one impact of the new tax law. The effect of these tax law changes and the tax rates will also depend on an individual's income sources, family size, marital status, as well as their qualification for other income tax provisions.

John: For many U.S. taxpayers that are used to claiming itemized deductions, this 2018 tax year might be a little bit of a surprise, because a lot of those deductions have either been modified or suspended. So, they might find that their taxable income for 2018 is higher than it was in 2017.

This will mean that, even though they might be subject to lower rates, the benefit of those lower rates will not be as big as or significant as they might anticipate.

You can see on your screen what the new thresholds are, but this will certainly be a big change for many individuals who used to claim the state and local taxes as part of their itemized deduction.

John:  Another big change to deductions is the suspension of the deduction for qualified moving expenses.  Moving can be very expensive, especially if you are on an international assignment.  And under prior law, if your employer reimbursed you for those expenses, that amount actually wouldn't be included in your income. It wouldn't be included in your wages. If you paid those amounts out of pocket, you'd be eligible to claim those expenses as a deduction.

That's not the case anymore in 2018. For 2018 through 2025, the exclusion for employer-provided housing has been suspended, and the deduction for qualified moving expenses has also been suspended.  This means that you'll start to see moving expenses including in your W-2. This increase in income might be a bit of surprise for you in 2018.

Kristen: That could be a source of frustration for many people that move during the 2018 tax year. Hopefully, in following years, people will understand it. But I think for 2018, that's going to be something fairly difficult for people to understand.

I think another area that's going to be difficult for people to understand is the change in the mortgage interest deduction, which previously, under prior tax law, individuals were allowed to claim interest on mortgage indebtedness up to $1 million. That was indebtedness used to acquire, build or to substantially modify an existing residence.

However, the new tax law has been imposed effective December 15th, 2017, which is a somewhat uncommon date, so we need to make sure people realize it goes into effect with properties acquired after December 15th.

But the new limit is $750,000 of mortgage indebtedness and the interest on that indebtedness, and it does not allow for the deduction of interest related to home equity loans. So, this will be a significant change to individual, as well.

All of these changes put together could mean that many individuals may find it more beneficial to claim the standard deduction as opposed to the itemized deductions going forward.

John: There is certainly a lot going on with deductions.  And before we move on, I want to take a moment and talk about the changes to how investment income is taxed.

Although the rates at which long-term capital gain and qualified dividends are taxed have not changed -- they still remain 0%, 15% and 20% -- the threshold at which these rates kick in has changed. They're no longer tied to an individual's tax bracket. They actually have their own tax brackets. And the amount at which these rates kick in are going to be displayed on your screen.

It's important to note that for after the 2018 tax year, these amounts are actually indexed for inflation. So there will be slight increases each subsequent year.

Well, John, we've talked about income and deductions, and now a brief mention about tax credits. Finally, some welcome relief.  Taxpayers who have children under age 17 can claim a tax credit of almost $2,000 per individual. That's nearly double what it was under the previous tax law. $1,400 of this credit is actually also refundable, which is going to be a welcome relief to many taxpayers.

For individuals who are on foreign assignment and who claim the foreign earned income exclusion, there is no portion of the tax credit that is refundable.

However, all is not lost. There is a $500 dependent credit that the new law provides for that's available to nonqualifying child dependents. So, other dependents in your household who are U.S. residents or U.S. citizens. And this is actually also available to children who would otherwise be qualifying children if they had a Social Security number.

Kristen: Well, John, I think we've just about run out of time. Before we go, we would like to recommend that for individuals that are impacted by some of these changes that they consider revisiting their Form W-4 and the withholding allowances that were claimed previously in 2018.

As a result of some of the changes we've talked about today, you may find that even with the change in the tax rates that excess withholding allowances may result in you being under-withheld for 2018.

In addition, there are certain other changes that we haven't discussed today that you can see on your screen now that we would recommend that you discuss with your tax provider if in fact they pertain to you.

John: The changes in the new tax law may seem daunting and difficult to digest. That's why we recommend before the close of the year talking with your tax advisor so that you can be prepared for the 2018 filing season.

Kristen: Thank you for joining us today, and good luck with your 2018 tax filings.

Revolutionizing the future of mobility through innovation.