KPMG's John Gimigliano discusses the signing of the new U.S. tax law in December 2017 and what comes next.

Principal in charge of Federal Legislative & Regulatory Services in our Washington National Tax practice, KPMG US 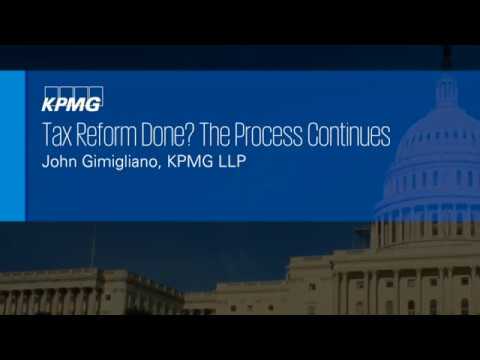 John Gimigliano: You know, 2017 was a pretty quiet year. We expected to see a lot of activity through 2017, and we didn't really until suddenly we did. Starting in November and December, we just hit a burst of activity. It surprised a lot of people (including me) that they [Congress] could get so much done so fast, but they did, and really completed tax reform in about two months; pretty remarkable.

There are gaps in understanding of the law. There are some things that just weren't written quite the way they intended, so there are going to be corrections—technical corrections as a legislative matter over the next year or years, as well as the Treasury is going to have to issue regulations to help taxpayers fill in the gaps on their understanding.

Well, it's an enormous bill and there are lots of things happening in the bill. But I think a few key takeaways are this:

First of all, the corporate tax rate was reduced dramatically, from 35% to 21%. That has major implications, probably none more pressing than the financial statement implications for most companies in terms of how to report the effect of that rate reduction.

If you're a multinational business, the system of taxing multinational income has changed dramatically and forever. And that's something that companies will need to try to understand and apply right away.

And if you're a passthrough business, a partnership, or an S corporation, again, there is a whole new regime of taxation that applies to you. It's very complicated, and it's something people have to try and understand quickly and apply.

As the law evolved and developed over those months of negotiation, and especially through November and December, we wrote quite a bit about the law. We issued several books about the house bill, the Senate bill and ultimately the final bill that became law. Those are available on our Tax Governance Institute Website, and I think they are a very useful resource. [See link on right to access KPMG's latest book.]

Our broad range of tax planning and compliance services can help you manage tax risks and opportunities.