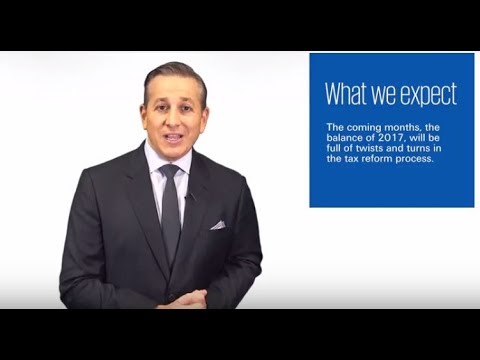 If you have been watching the tax reform debate over the last year, you know that the Trump Administration and the Republican-controlled Congress has made tax reform among the very highest of its priorities for enactment in 2017. Yet here we are in the fall of 2017, coming down the home stretch, and frankly, we don't have a lot to show yet for their efforts.

Now we have seen a release by the top tax reform negotiators, the Big Six, of a framework on tax reform. At about eight pages, it's more of a guidepost to the direction of the negotiations than it is a completed deal. And it's certainly not a comprehensive view on tax reform.

We do expect the House of Representative to later this fall release a comprehensive tax bill—full legislation—and that can be reasonably expected to be followed by something released on the Senate side.

So that may leave you wondering, "Well, where do we go from there?"

Well, nobody can predict the future or say with any certainty, but I can say this with certainty, that the coming months—the balance of 2017—will be highly entertaining and full of twists and turns in the tax reform process.

If you like politics and the legislative process, there will be much to see. Now look, there are no guarantees that Congress will be successful in enacting comprehensive tax reform.

And, in fact, there is no guarantee that they'll be successful in enacting something less ambitious than comprehensive tax reform—consider it, perhaps tax relief.

And, in fact, it's possible that as the clock strikes midnight on December 31 of this year, our tax code will look exactly as it does today. But between now and then, we are going to see quite a bit of activity in negotiating, drafting, and considering the possibilities of tax reform.

And I hope you'll stay here with us at KPMG here on our tax reform page as we report to you what happens on a daily basis with our special reports and as we provide you with our Webcasts.

The information contained herein is not intended to be "written advice concerning one or more federal tax matters" subject to the requirements of section 10.37(a)(2) of Treasury Department Circular 230.

The information contained herein is of a general nature and based on authorities that are subject to change. Applicability of the information to specific situations should be determined through consultation with your tax adviser.